Change your mind, because the Kingdom is within reach

Emily Tomko
Healing, Spiritual Growth
David and Goliath, facing the giants, prayer and the Holy Spirit, Repent for the Kingdom is at hand, repentance definition, spiritual giants, trust and obey, wait and remember

MOB RULE and the Kingdom of God 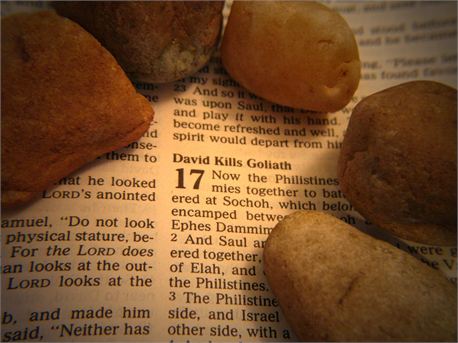 Matthew 4:17 says “From that time on Jesus began to preach, ‘Repent, for the kingdom of heaven is near” (NASB).  I used to think that that passage meant something along the lines of “Confess your sins, so you can go to Heaven.”  But the Greek word for repent here is  metanoeo, which means, “to change one’s mind.”  The kingdom of heaven that Jesus is referring to is His kingly rule established here on earth.  In other words, He’s saying “Change your mind, because My kingdom is up for grabs – I want you to see yourself and the life you’re living and the circumstances around you the way that I The Lord do – to deliver things into your hands and put things into motion that you can’t even see yet.”

I was recently reading the story of David and Goliath to my daughter out of her children’s Bible, and it brought me into repentance. When I read it immediately afterward in my own Bible, David’s words and actions in 1 Samuel 17 again challenged me.  Regarding the enemy of God, he asked “Who is this uncircumcised Philistine, that he should defy the armies of the living God?” (NASB, 17b).  Later, David asserts confidently that God will deliver him from the hand of this Philistine (37).  Despite all his failures, this is one of the reasons why he was a man after God’s own heart!  David had faith in the faithfulness of his God.

Don’t put your trust in what your eyes see

With the onslaught of broken relationships and illnesses and tragedies in our community, and the continued hard-heartedness of unbelievers I’ve prayed for for years, I can find myself wondering in frustration, “When does this end?  Is life just going to be like this?  Not another giant, Lord – I can’t take it!”

But the LORD is saying, “Change your mind about your circumstances, about conventional wisdom, about hopelessness, and especially about the inability of people to change.  Every godly thought you  have is because My Holy Spirit touched you.  Your flesh didn’t just come up with this.  You have as much free will and tendency toward lawlessness as anyone else, but look what I did for you!  How will I not bring restoration and health and freedom to you and others you have been praying for when it is My good pleasure to do so?”

I recently heard the testimony of a local man who was a believer but drifted away.  His wife left him, and he got serious about God and began praying diligently for her and pursuing her. However,  she was unresponsive and he eventually gave up and drifted into sin himself. Suddenly, she came into repentance, but he was living in sin. Something he said struck me. “God was at work the whole time in my failed marriage.  If I’d waited longer and trusted Him, I’d have seen it.”

Wherever we feel like our influence and anointing is like a twisted up garden hose, and only a trickle is coming out to water a desert, it’s not true.  The kingdom of heaven is at hand.  We can’t believe what we see in the natural!  It’s not trustworthy!  Nor can we give up praying and acting in faith.  God will surely deliver us from the hand of the giant.