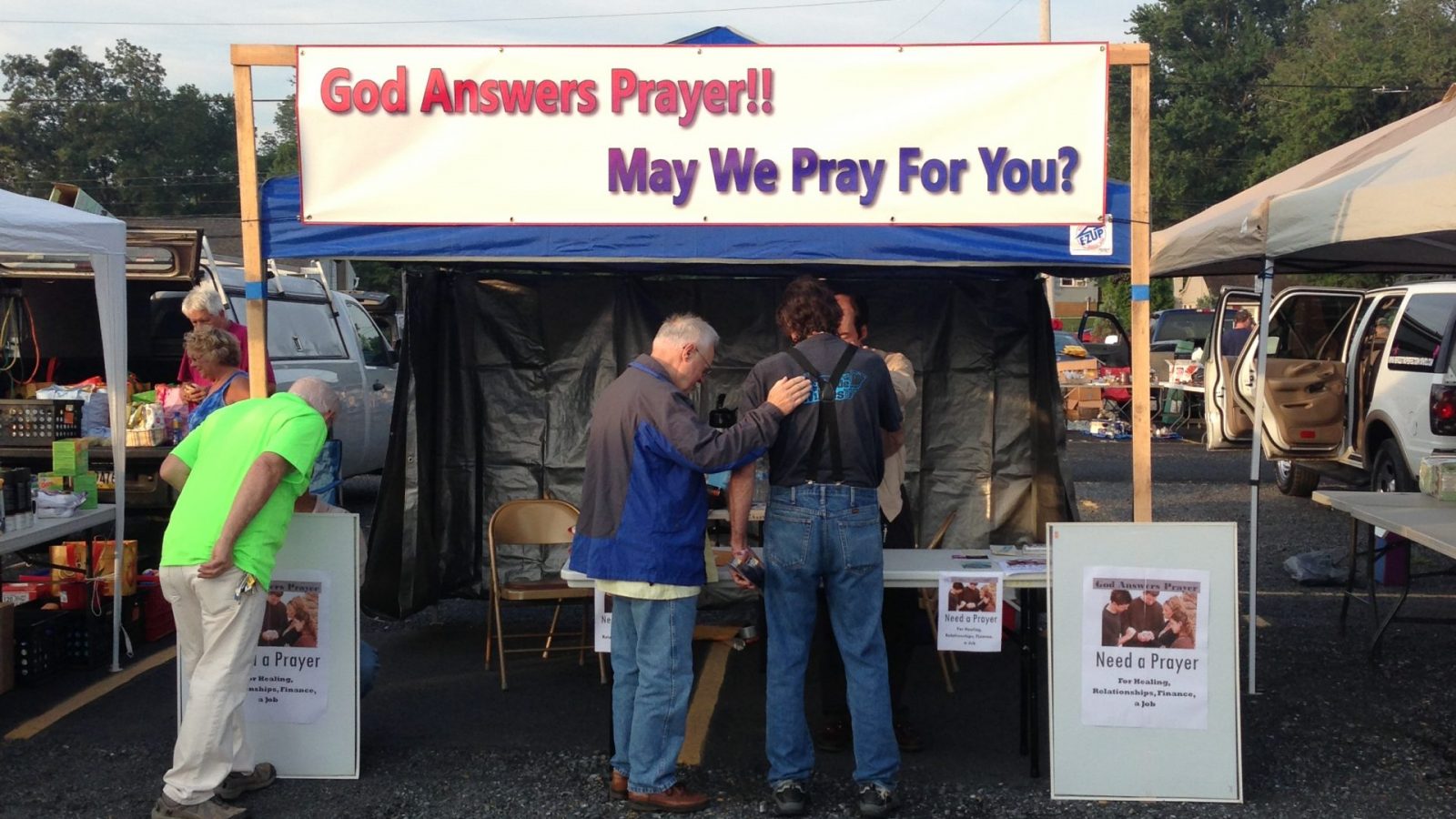 Last month, one of our pastors felt the Lord telling him to purchase a canopy and lease a space at the local flea market on a particular Saturday. The canopy was to be set up and used as a prayer tent – situated among dozens of vendors peddling various wares.

Our pastor had never undertaken such a thing, but he did as the Lord directed, and worked in conjunction with another local minister to set this up, arriving before dawn to put up the tent and hang a sign. They’d asked for participants to be in the prayer tent, and three people took the early shift, while three of us headed over later in the day.

By the time I arrived around 1 p.m., three individuals had reportedly gotten saved! There was a page filled with documentations of everyone whom the volunteers had prayed for – many for physical healing such as throat cancer or arthritis, and some for personal issues such as relationships and finances.

The line of people who accepted prayer was steady, although I’d not describe it as a throng. If someone had a visible ailment, we often asked them if they wanted prayer.

One young woman stopped and asked for prayer, exasperated with her fiancé who was also there, whom she said would not acknowledge phone calls from his alcoholic brother. For three days he’d ignored his brother, and as she stood before our tent, we watched him from a distance finally pick up the phone and begin to talk to him.

I had the privilege of laboring with two of my brothers in the Lord whom I deeply respect. One has a strong prophetic anointing, and yet is a deeply humble man. His own background was so severe that nothing could shock him, and he knew exactly what some of these wounded people were carrying. I appreciated the gentleness, the ease both of these men had in talking with people.

In the middle of ministering, a man in a pickup pulled up so that he was eye-level with the three of us and fired out a question. John, the prophetic pastor from North Carolina, walked over to talk with him. It didn’t take long for John – and the rest of us – to realize what we were dealing with. Pastor Vaughn Martin had delivered a sermon the night before on the religious spirit, and how whenever people are sent out, it will manifest in bitter anger. It will seek to discredit and shut down the true work of the Kingdom of God.

This gentleman in the pickup could quote all kinds of scripture, but his questions were purely bait, thrown out to trap the person ministering. At one point, this stranger lashed out at John, “The gift of prophecy ceased! There is no more prophecy!” John replied gently, “I can tell you that’s not true, just as I can tell you that you have a lung condition. May I pray with you for healing?” The man was temporarily stunned into silence.

He returned a short time later to harass us again as he pounded his steering wheel from within the safety of his truck. He asked us a loaded question about repentance, and I spoke up for the first time with what I thought was a good answer. He turned on me, jabbing a finger as he began to pontificate on “women speaking in the church.” I laughed, pointing out that we weren’t in the church.  On and on he went. He didn’t bother me, but Pastor John valiantly said to him at last, “I bless you and honor you, but I’ll not have you insulting my sister this way.” And he bid him goodbye.

All in all, it was a wonderful day, filled with meeting new people and having the opportunity to bless their lives. We were able to pray with some Christians who had strong anointings themselves, and that was lovely. What struck me in this venture of prayer evangelism was

–          The great needs people are carrying, whether physical or relational, and how thirsty some are for prayer, regardless of where they’re at on the spectrum of faith

–          The great loneliness of people. I have never been to this flea market in my life, and would probably never have a reason to go. Yet I know some of the folks went to that place out of sheer solitude – wandering around in crowds of people and all that stuff for hours at a time was simply something to do to avoid the desperation of being alone.

–          The gentleness, humility, and love exhibited by the two men I was with – there was nothing awkward or clumsy in their interaction with strangers. They exuded grace.

Interestingly, our pastor confessed that he nearly didn’t go through with the prayer tent. He had been having second thoughts the night before, wondering if this wasn’t a really foolish thing to do, etc. Later, he said that he was pretty certain those thoughts were the enemy trying to derail this. Now, we’re looking forward to the possibility of doing prayer evangelism as a regular monthly ministry.