Spiritual Warfare – the shield of faith

Spiritual Warfare – the preparation of the gospel of peace

A Taste of New Wine is now available! 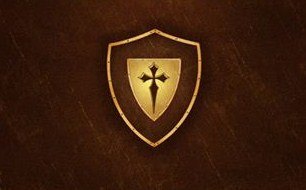 “Put on [or clothe yourselves with] the Lord Jesus Christ and make no provision for the flesh” says Romans 13:14 (NASB). As we study the armor of God, remember that each piece of the armor is actually Christ that we are putting on. The first piece, the belt of truth, is exemplified in John 14:6, when Jesus said, “I am the way and the truth and the life.” The breastplate is Jesus our Righteousness, according to Jeremiah 23:6 and 2 Corinthians 5:21 – in Him, we are righteous before the Father! Concerning the feet shod with the preparation of the gospel of peace, Paul says in Ephesians 2:14 of Jesus, “He Himself is our peace” (NASB).

Christ is our shield as well. Over and over in scripture, twenty-two times alone in Psalms and Proverbs, The Lord describes Himself as a shield to His people. This is in the context of a refuge, a hiding place, a help, a deliverer, and a strong weapon on the day of battle.

Just before God made a covenant with Abraham, who’d be the father of His people, God’s word came to him in a vision, saying “Do not fear, Abram. I am a shield to you; your reward shall be great” (Genesis 15:1 NASB).

A shield that does more than protect

The shield of faith is fourth in the list of armor that Paul instructs the church to take up in Ephesians 6. “In addition to all, taking up the shield of faith with which you will be able to extinguish all the flaming arrows of the evil one” (v. 16 – NASB).

In this verse, the Greek word for faith is defined as “conviction of the truth of anything, belief” and carries with it the idea of such truth being joined with full trust and fervor (blueletterbible.org). Taking up the shield of faith is employing our absolute confidence in God – in His character, in the promises of His word, and in His all-knowing and all-seeing judgment – whenever doubt, temptation, or deception strikes.

“He will cover you with His pinions, and under His wings you may seek refuge; His faithfulness is a shield and bulwark” (Psalm 91:4 – NASB). It is really God’s faith that He gives to us. And it is faith in God’s faithfulness that is our shield.

It is interesting to note what Paul says the shield of faith does: it quenches – or extinguishes, in some translations – all the fiery darts of the evil one! ALL! Every single wicked barb aimed at us by our enemy, the shield of faith not just deflects but actually douses entirely!

The Spartans, the elite warriors of ancient Greece, used their shields as offensive weapons as well as defensive – that is, they could do serious damage to their opponents with both the weight and blunt edge of their heavy shields. Likewise Paul indicates here that we are not just sheltered from attack by the shield of faith, but that we actually overcome the assault of the enemy with it!

Our shield of faith can’t properly be wielded unless we’re armed with the belt of truth, because it is out of the understanding of who God is and how He operates, as well as the promises found in His word that our faith grows. “Faith comes by hearing, and hearing by the word of God” (Romans 10:17). It is essential to know the word of God – to hear it and have it constantly in mind – in order to be properly covered and protected from the fiery darts.

In the Garden of Eden, it was doubt in God’s word that ensnared Eve. “Did God really say . . .?” is how the serpent tempted her (Gen. 3:1). Satan’s methods have not changed all these thousands of years later. “Did God really say to you that the sin you’ve been indulging in is deadly? Isn’t He the God of grace and compassion?” “Did God really say that He will give you victory? Remember that time you were so disappointed with the outcome of your prayer?” “Did God really say He is Jehovah-Rapha, the God that heals? Perhaps He isn’t that kind of God for you. Not for today. Not for this particular illness.”

When we are warring in prayer, it is very helpful to begin by stating what we know to be true of God’s character, His promises, who we are in Him, and His past faithfulness.  This is a form of worship. You will find as you begin speaking out what His word says to be true of Him and of how He acts on behalf of His people, your faith will increase and you will begin asking “bigger and better,” according to His will!

We can also go directly to the Bible and declare these things out loud. In this day of internet search engines, scripture on any topic and any promise of God can easily be found.

In what areas are you vulnerable to the flaming darts of the enemy? Lust? Gossip? Doubt? Read the word of God aloud and state your agreement with it. Meditate on it. Internalize it. Like the disciples, ask The Lord to increase your faith (Luke 17:5). He will build up your shield so that you can walk in total victory!