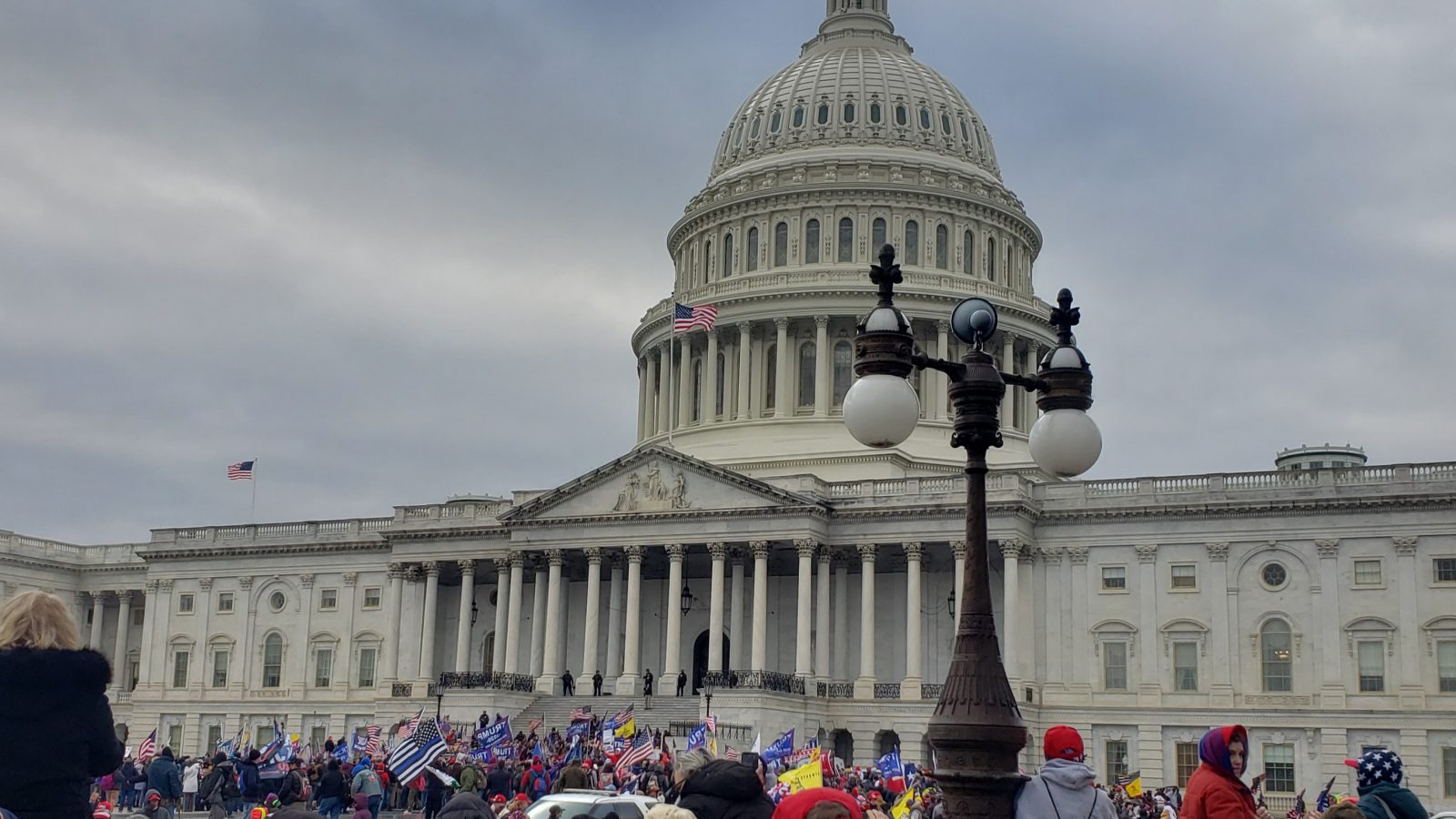 Four coach buses left my hometown Wednesday morning in the darkness of a frosty January morning.  Those of us on board had set aside work and daily demands to make this journey. The mission was to express support for the democratic process now under attack,  amid widespread reports and testimonies of unscrupulous ballot handling, postal irregularities, breach of mail-in ballot laws, voting machine failures, fraud, and intimidation of whistle blowers, even allegedly on the part of the FBI.* 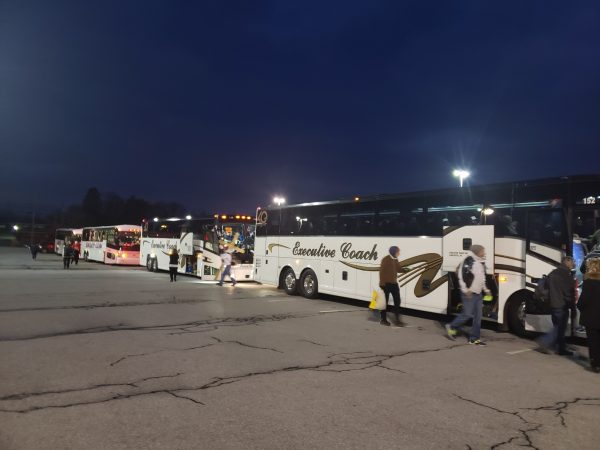 Two women in our group had direct experience as poll workers and testified of not being able to carry out their appointed duties during the voting in Pennsylvania. Their cries of alarm had fallen on deaf ears.

A Dark Contrast to Democracy

Only two weeks before, I’d chatted with a friend who was departing for Colombia, where his mother, a Venezuelan, was living. He was flying to spend Christmas with her and to minister to other Venezuelans traveling across the border from his homeland and refresh them with food and water and encouragement. His own native Venezuela had used the Dominion voting software now under criticism here in the swing states of the U.S.

“Will you have any opportunity to visit your homeland?” I asked him, as he said how his mother longed to return.

“Oh, not without paying bribes,” he replied. He shook his head. “No, the corruption among the authorities there makes it too risky.”

I reflected on his words as dawn broke over the fallow fields neighboring the roads. We in the U.S. have not yet imagined what most of the world lives in, not because there aren’t enough resources, but because governmental tyranny holds basic human needs hostage. While essential food and medical treatment are vital and material, due process, the right to personal property, self-defense, freedom to assemble, and freedom of speech are sacred needs of the spirit that most of us take for granted.

It was not only Pennsylvanians in our crew. Some had come from out of state, as far as Maine.  One woman drove all the way from Canada.  She stayed at my place although we had not previously met. Her mission especially was costly, for in Canada upon her return, she would be forced to quarantine 14 days, with an official coming to her house. “Neighbors will rat you to authorities if you leave your yard,” she reported. The police state was real for her, and coming to neighborhoods near us, she predicted.

Upon arriving in Washington, we merged with throngs of other patriots. One of the first sights coming out of Union Station was crowds of Asians with anti-Communist signs. Banners expressing Chinese Communist party’s influence on our leaders here in the West greeted us, and petitions to stand up for Chinese human rights were pressed.

We had been warned coming into Washington that the violent Marxist opposition known as antifa was planning an infiltration of our group.  We had been advised as to how they typically dress, one indicator being Trump hats worn backwards.  We were told to stay in groups of no less than eight people and to avoid going off somewhere without protection in numbers.

The president was scheduled to speak on the ellipse that morning; however, the group I was with did not make the trek down there but opted to establish a place at the Capitol.

We met people from all over the continental United States that morning.  They’d driven in from Virginia and Delaware,  New Jersey and New York, Ohio and Kentucky and Arkansas, all for the same reasons as we did.  “Don’t Tread On Me” flags waved in the breeze alongside state flags from all over the country. There was diversity of ethnic representation and the prayers of various faiths could be heard surrounding us as the morning waned. Priests in dark overcoats stood shoulder to shoulder with nose-ringed Millennials. The star spangled banner and other patriotic songs rang out lustily in the crisp air.

People near us broadcast the president’s speech. As far as the eye could see was a sea of people. I’d been to many rallies but never had I seen anything like this. The excitement, positivity, and the love of liberty and country was palpable. 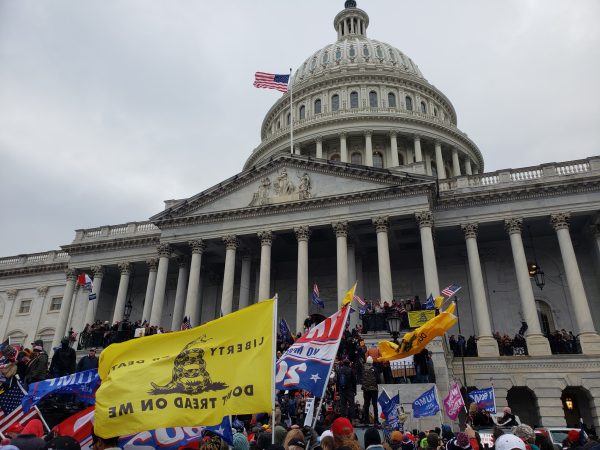 A black pastor on a megaphone preached the gospel. We noticed that as he did, the thick dark clouds over the capitol building parted and a patch of sunlight came through. When he ceased minutes later, the cloud layer thickened and we no longer saw light.

A motorcade reportedly escorting Pence arrived. The crowd vocalized support, exhortation, admonition. A military vet near me shook his head. “Pence won’t come through for him,” he declared. “Trump already knows it.”

All day people arrived at the Capitol and the crowd outside swelled.  The feeling was like a concert. People talking as if they’d known each other all their lives, swapping stories, prayers, patriotic songs.

Late in the afternoon we were given word that electors from Arizona had objected to certifying the vote. Cheers went up. “Were not.going to take it” was the anthem playing on the loudspeaker.

“The barricades are down!” someone hollered. “They’re going up to the Capitol steps!” I looked up to see crowds now standing as far as the steps, singing and waving flags.

I was puzzled.  Why were police allowing them to get so close to the building when all day the barricades had stood, and so had the police?

Minutes later, I began getting texts.

“What’s going on in Washington?”

I didn’t understand the alarm. From where I stood nobody was breaching the building. It was impossible to do so because the doors were shut and a boom like a bomb went off when somebody made contact with the doors.

The whole day, there had been no hint of insurrection or aggression. The crowd was peaceful, upbeat, friendly — characteristic of all the rallies I’d been to in years past. No calls for insurrection of any kind, from any official or citizen on the ground.

The media, heedless of the careful collection of facts, was whipping up the American public into an emotional frenzy, and one that contrasted starkly from the scene before my eyes.

Hours later, we learned from those who had been on the other side of the building, that someone had penetrated the building. “We saw them break a window and the crowd was yelling at them to stop,” my friend said. More reports and photos circulated and came out still later. But this is where my eyewitness and firsthand hearing ends.

These are questions that the media failed to investigate before they sent U.S. citizens into a state of frenetic tribalism:

Why had police reportedly waved protestors in?

Was the timing of the electoral college’s resistance to certify related to the surge toward the Capitol?

Was there communication between Antifa and authorities?

Was what happened orchestrated by anyone within?

Was all of this planned on the part of corrupt officials in connection with Antifa?

Why did congress so quickly reconvene if they supposed they were in any kind of real danger?

Most unbelievable in all of this to me was the media-fed uproar by politicians and citizens alike. The same voices that have been recklessly labeling the President and peaceful patriots as “anarchists” and “terrorists” were radio silent all summer while our cities burned and people were killed — including little children.

Had the other side had the sheer numbers represented in Washington on Wednesday, they would have burned it to the ground. This is not speculation. This is their track record in every city in America where they’ve been allowed by sympathetic Leftist politicians to carry out their guerilla style terrorism in the name of Justice. I did not hear one single person or media outlet that is now wringing their hands and shedding crocodile tears say a word about the destruction and death caused by these trained Marxists. The glaring double standards belies a loyalty to agenda over regard for reason. Such patterns show  corruption of character and a bestial mentality that is a far greater threat to our Republic and to global human rights than anything we’ve seen.

Ignorance of history, civics and the embracing of moral relevance, combined with Big Tech media propaganda, have created a recipe for the self-cannibalization of a prosperous culture. Otherwise decent people are deceived, and have been carried off by emotional Zeitgeist. Spoiled intellectuals sit in their million dollar homes and vote for policies that go directly against their entitlement to wealth-building and private property. Politicians elected to represent now seek to rule their citizens instead.

This is what we’ve come to.

Above all, I see nice people who have ingested bitter hatred these last five years, so much so that they even justify the poison they carry around in their hearts. Christians who preached from 2009 to 2016 how we needed to pray for leaders, suddenly in the last four years have been so infiltrated by the spirit of this age that they can’t even see the murderous anger that is carrying them straight to Hell’s gates. They don’t perceive that they’ve strayed from believing the simplicity of sin and the cross, and instead now preach Trump as the chief enemy of mankind and social justice as its solution.

This is what should dominate our thinking — and righteously terrify good citizens.

Without divine intervention, we are headed for destruction, possibly an all out civil war. Some Americans will be content to live as domestic house cats for a time, doing what their officials tell them to at the cost of liberty, shamed by their peers into daring to question the narrative, daring to desire their own civil liberties, daring to listen to opposing voices in science and medicine.

But Wednesday proved one thing: there is a love of liberty and a backbone of independence in this nation that will not retreat. The million plus in Washington on Wednesday are only a cross-section of America’s undergirding. This is at odds with the slavery, tyranny, and “yes-man” mentality of Marxism. The two will not long coexist.

I believe that ultimately, right will prevail. It will come at a cost.