Spiritual Warfare – Man as a triune being (spirit, soul, and body) 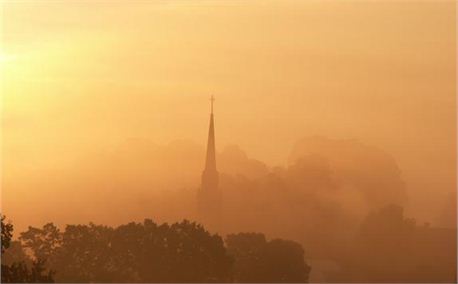 Has God given you a word for 2014? That is, have you asked Him for something very specific that He wants to do, whether in you and through you or in the church or the world at large? In a previous post, I mentioned that at the beginning of 2013 one year ago, I sensed very clearly The Lord saying, “2013 is the year of restored marriages” and that that was a declaration that I was to pray and proclaim for those around me. (This doesn’t mean, of course, that God doesn’t want to restore marriages this year or any other year just as much – rather, a word for the year is one way to charge our faith and to look with expectation for His fulfillment in the new year).

On January 1, 2014 I asked The Lord for a distinct word for this coming year. He led me to Psalm 43:3, which says, “O send out Your light and Your truth!” One very specific prayer that I have for the church and the nation at large is that people would break free of lies they have believed: about themselves, about sin, and especially about God. My prayer is that light and truth would shine on all the dark and dim places, on believers and unbelievers alike.

Something peculiar happened this past week that I sensed later was a prophetic picture. We drove from Pennsylvania to Florida, and the entire 993 mile drive, southbound – and then nine days later northbound – in every single state, there was perpetual fog – we kept seeing it everywhere. I realize of course that there are scientific explanations for this, but what I couldn’t get over was how prevalent it was (my husband later teased me because I kept remarking on it). Mile after mile, state after state, we’d see mist hovering around the trunks of trees, rising off of rivers, and rolling over mountains. Even on the brightest, sunniest day that we had in Florida, right on the beach in both directions and well into the afternoon, there was fog clouding houses and palm trees as far as the eye could see. It was the same way on our return, in Florida and in Georgia, all the way up through both Carolinas, Virginia, Maryland, and finally Pennsylvania. Every region was covered in it. We couldn’t even see downtown Richmond as we drove through because of how thick it was.

I really sensed that this was a natural manifestation of a spiritual reality that is true of the nation. At Christmas I’d remarked to someone how I felt that the whole country – including sadly some Christians – is in a stupor. They have no idea what’s going on around them, no thought to the times or what’s directly ahead. Their priorities are their daily comforts and feeding media addictions and they’ve no clue that for them as individuals – and for the nation as a whole – what’s going on around them and the potential peril.

The second thought that struck me on this recent trip was during a day we spent at Magic Kingdom. I was watching the crowds and listening to all the languages and just observing people, and it hit me that for many, fantasy has become more real for them than reality. People are more concerned about the fate of a television character than their next door neighbor who’s dying prematurely. They’re more obsessed with a video game score than a relationship that’s in trouble. This ties in with the whole fog theme as well. As if for confirmation, I overheard a few seconds of a news show this week in which a reporter said people were taking “selfies” of themselves on their camera phones, oblivious to those in accidents around them caused by the icy weather.

The good news is that God said “In these last days I will pour forth my spirit on all flesh, and your sons and your daughters shall prophesy, and your young men shall see visions, and your old men shall dream dreams” (Acts 2:17) – and we know it’s happening already! The good news is that “the increase of His government and of His peace there shall be no end!” (Isaiah 9:7). The good news is that right now, in the region where I live, church leadership is coming together like never before, crossing denominational lines, praying and fasting and travailing together, and we’re seeing the darkness being routed in very tangible and practical ways, with the school district, local government, and civic organizations in agreement with what the church is doing. A company that sold drug paraphernalia and and was trying to establish its presence on the main street of my home town was kicked out, its owner arrested on multiple charges. Five abortion clinics in my state have closed in the last three years. In our church, we are seeing incredible physical healings every week, including of aggressive cancers.

It’s not going to stop there. It will surely spread to the east and to the west and to the north and to the south. The fog on the eastern seaboard will lift, and even the cities will have light shining on them (I remember even as I write this of a vision God gave me many months ago of fog lifting off the city of Philadelphia).

God is always looking to partner with the faithful remnant. As Chip Brogden said, “Without Him, we can do nothing; without us, He will do nothing.” The question is not whether God is able or whether He is willing to shine forth light and truth. It is, are we willing to be His vessels and obedient to whatever He tells us to do? For it is through us His church that He primarily sends forth His truth and His light.

What has He said to you?

What has God said to you for 2014? It is good to hear testimonies of what the rest of the Body of Christ is sensing and hearing through God’s word. If you haven’t asked Him for anything specific, may I encourage you to do so. He does not disappoint, and His word will add excitement and expectation and encouragement to the year ahead!