Emily Tomko
Spiritual Warfare
1 John 3:8, 2 Timothy 2:4, Christ our Kinsman-Redeemer, Colossians 2:15, Genesis 3, God's will vs. Satan's will for man, Matthew 6:10, Ruth and Boaz, seated with Christ in heavenly places, serpent shining one, spiritual warfare, the first and second adam, the garden of eden, the Lord's prayer and God's will 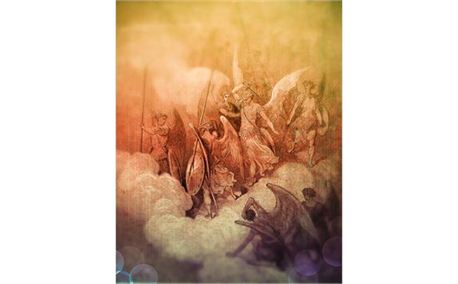 Is it possible that the first emotion you could experience on the other side of eternity is regret – even if you’re in Heaven? 1 John 2:28 indicates that some Christians will shrink in shame at Christ’s appearing.

Scripture says that believers are kings (1 Peter 2:9), that we’re seated with Christ in heavenly places right now (Ephesians 2:6), that the kingdom of heaven is at hand (Matthew 4:17), and that God can do immeasurably more than we could ask or imagine according to the Spirit at work in us (Ephesians 3:20). Yet how many Christians live like paupers, barely getting by? It’s a sobering thought that in our first encounter with the glorified Christ we could be ashamed at how impoverished our lives and those of others around us were because we neglected to walk with Him in the fullness of what He paid for us to take hold of here on earth.

As mentioned in previous blogs in this series, understanding spiritual warfare is a key to comprehending the nature of God as well as our adversary the devil, and making sense of  our lives and the world at large. Furthermore, knowing the principals of spiritual warfare allows believers to engage in the battle, thereby changing the lives of those we love, our communities, and even transforming nations. The soldier who carries out his duty (2 Timothy 2:4) need not be ashamed when he sees his Commander.

As in any war, we need to understand who we’re fighting and how to fight – and what victory entails. The reality of failing to understand spiritual warfare is that many Christians mistakenly attribute works of the devil to acts of God. But scripture tells a different story.

To understand where we’re at now in the world, as well as to have a picture of how the world should look, it is necessary to take a crash course in history. In the beginning, God gave the earth to man to cultivate it and care for it (Genesis 2: 15). Psalm 115:16 underscores this understanding of man’s original designation: “The highest heavens belong to the LORD, but the earth He has given to mankind.” Psalm 8:4-8 says, “What is mankind that you are mindful of them, human beings that you care for them? You have made them a little lower than the angels and crowned them with glory and honor. You made them rulers over the works of your hands; you put everything under their feet: all flocks and herds, and the animals of the wild, the birds in the sky, and the fish in the sea, all that swim the paths of the seas.”

So God appointed man to cultivate the earth and have dominion over the creatures. Man enjoyed harmony with his surroundings and fellowship with God (Genesis 3:8).

The serpent (or “shining one” as the original Hebrew word is translated) usurped the authority from man after Adam ate from the tree of knowledge of good and evil. A curse entered the world – man was cut off spiritually from God. He was now subject to death – both physical and spiritual. Romans 5:12 says “Sin entered the world through one man, and death through sin, and in this way death came to all people, because all sinned.“ Instead of man ruling the earth as God had intended, Satan took man’s God-given authority. The devil is known as the ruler of this world (John 12:31, John 14:30). This explains why the world is in chaos – the devil is ruling it. Pastors and churches that focus on the sovereignty of God to the exclusion of the fact that He expects His church to bring His kingdom to earth (Matthew 6:10) offer little hope for the present condition of this world.

It is important to note that not only man was cursed when sin entered the world, but also the earth (see Genesis 3:17). Natural disasters, disease, and death were not part of God’s plan for mankind or this planet. These are all a result of the process of decay that started when man gave his authority to the devil by choosing to disobey God.

Worst of all, because of the fall, man has found himself now separated from God.

Jesus stated plainly His reasons for coming to earth in several passages of scripture. “For the Son of Man has come to seek and to save that which was lost” (Luke 19:10). He said in John 10:10, “I have come that they might have life and have it more abundantly.” 1 John 3:8 says that “For this reason the Son of Man appeared: to destroy the works of the devil.” Matthew 5:17, John 3:17, John 14:9 and other passages give further explanation for God’s purpose in sending Jesus. It is thrilling to read every single one, but for the sake of brevity, I will not list them all here. One central reason for Christ coming to earth was that everywhere the curse was at work – that is, everywhere death had a stronghold – Jesus might conquer it once and for all and bring life.

Most Christians have an understanding that Jesus’s death met the requirement for sin penalty under the Law, thereby assuring all who put their faith in Him a share in His righteousness, and thereby no more penalty of eternal death through separation from God. However, this was only one part of why Jesus came to earth. His reason for coming was to destroy every corrupt and every evil thing that had come into the world after the fall of man. This includes illness, disease, corruption, famine, crime, and even the devastation of the land (pollution of the land is foremost a product of sin and bloodshed (see Numbers 35:33; Psalm 106:38; Isaiah 24:5; Jeremiah 3:1-2; Jeremiah 16:18; et al).

Jesus didn’t die for Himself. He did it for us in order to restore the lifeline that was severed from God in the garden. “[God] made [Christ] who knew no sin to be sin on our behalf, so that we might become the righteousness of God in Him” (2 Corinthians 5:21). “For Christ also suffered once for sins, the righteous for the unrighteous, that he might bring us to God, being put to death in the flesh but made alive in the spirit” (1 Peter 3:18).

All that is in the Old Testament is there to point us to Jesus Christ and the new life that we enjoy in Him. There are many stories, symbols, and types on which we could focus, but I want to highlight briefly the book of Ruth. In addition to being a love story full of romance and intrigue, the Old Testament story of Ruth and Boaz is a beautiful picture of the role that Christ fulfills as our Kinsman-Redeemer by His death on the cross. It also reflects God’s plan of adoption of the Gentiles and the “unclean” into His family, as Ruth was born a Moabitess – of a pagan people – and Boaz was the son of Rahab, the harlot from Jericho.

In ancient Israel, a kinsman-redeemer was one who restored the full rights of a disadvantaged family member, particularly a widow or orphan. The concept came out of God’s covenant provision for His people. Ruth was a widow, without prospects in the Hebrew community. She showed deep devotion to her mother-in-law Naomi in refusing to go back to the idols of her people. The source of her devotion is seen in her statement to Naomi in Ruth 1:16, “Your God shall be my God.” The outcome of her decision was that Ruth enjoyed a dual blessing: she found true love in her kinsman-redeemer Boaz, and the two of them became great-grandparents to King David, and  ancestors of the Messiah himself. Christ fulfills this picture of kinsman-redeemer in that He restores all rights and entitlements that sin has stripped us from. We are adopted into the family of God, and are in community with Him. We are coheirs with Christ (Romans 8:17), and under an open channel for His blessings here on earth.

For those who’ve grown up in a Christian community and have heard these scriptures, we can lose sight of the fact that this is a really big deal! The implications of our kingdom inheritance because of Christ’s death and resurrection are incredible and limitless! They are for now – right here on earth! We will expound in the next blog on what this means for us practically.