Bringing Cain’s Offering to the House of the Lord

The Ministry of Reconciliation and the Return of the King

Frighteningly dangerous: the church without the Fear of the Lord 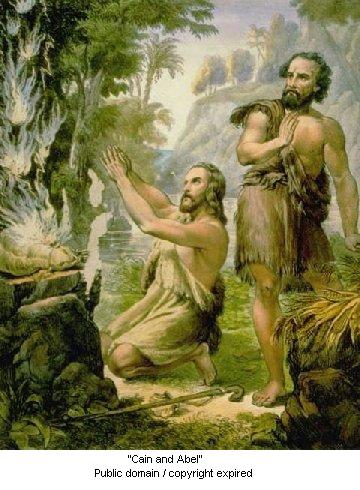 Are you bringing Cain's offering to God?

Sleepily you open one eye. You could catch another half hour’s wink perhaps. However, this will mean you’re scrambling to get to church on time.

Reluctantly, you get up, trying to decide whether it’s a greater priority to try to get in the scriptures or fry some bacon.

Two hours later, you’re in the car. The kids are squabbling, you’re irritable with your spouse, and your hair smells faintly of bacon.

You arrive just in time and cram into a seat. You turn your attention to the words displayed at the front of the sanctuary. This song again? You’re not even sure you agree with its chorus, much less like it.

“Now Abel was a keeper of sheep, but Cain was a tiller of the ground. And in the process of time it came to pass that Cain brought an offering of the fruit of the ground to the Lord. Abel also brought of the firstborn of his flock and of their fat. And the Lord respected Abel and his offering, but He did not respect Cain and his offering” (Genesis 4:2b-4, NKJV).

Why did God reject Cain’s offering and accept his brother Abel’s? Theories include God’s sovereign will, the fact that Abel was giving a blood sacrifice, or that Cain simply wasn’t offering his best.

Blueletterbible.org notes this: “The Hebrew word translated ‘offering’ is not the usual word for blood sacrifice. The most common meaning for this Hebrew term in Genesis Four is gift. Therefore, both offerings were proper for the two brothers who were at worship.”

The most reasonable explanation for God’s disdain of Cain’s offering, in examining scriptures, was Cain’s attitude in what he was presenting to God. For the Lord says this to him in verses 6 and 7:

“Why are you angry? And why has your countenance fallen? If you do well, will you not be accepted? And if you do not do well, sin lies at the door. And its desire is for you, but you should rule over it.”

Further in scripture, the character of Cain and Abel are contrasted. Cain is described as wicked while Abel is called righteous (Matthew 23:35, Hebrews 11:4).

The Apostle John wrote: “Cain. . .was of the wicked one and murdered his brother. And why did he murder him? Because his works were evil and his brother’s righteous” (1 John 3:12).

Jude said: “Woe to them! For they have gone in the way of Cain, have run greedily in the error of Balaam for profit, and perished in the rebellion of Korah (v. 11).

Is it possible today that we can love the Lord and yet bring an offering like Cain’s to His house?

In Acts 13:2, before the Lord commissioned the apostles to do the work that would literally transform the world, Paul and Barnabas and the other prophets and teachers were ministering to the Lord. This is the primary reason we gather together at His house, regardless of the day of the week, time, or locale.

I’m mindful many Sunday mornings of not giving God my best. Tired from staying up too late the night before, I stumble in with my heart not always prepared to minister to Him and to in turn receive from Him. When I’m supposed to be offering my devotions, I might secretly be wondering whether to make a casserole for lunch or opt for the drive-through.

“The sacrifice of the wicked is an abomination: how much more, when he brings it with an evil mind?” says Proverbs 21:27.

Through Christ we’re made righteous before God (Romans 3:22). But is it possible to be wicked in our actions and in our mind toward Him? Is it possible that at times He’s displeased with what we offer Him in our worship?

“The sacrifices of God are a broken spirit; a broken and a contrite heart, O God, You will not despise,” says Psalm 51:17. The word for “contrite” in this passage means “crushed to pieces, crouched.” This kind of heart is vulnerable, tender, low, humble. Such a state of heart cannot be proud nor critical nor preoccupied with the trivial.

The carnal nature shares no place with such a spirit.

All of us are susceptible to “Sunday morning coming down.” Unexpected events, weather phenomena, and the antics of young children happen.  From what others share and my own experience, it often feels the devil’s working overtime when God’s people purpose to gather together.

So how do we honor the Lord and keep our Sabbath holy?

Here are some ideas:

Affirm that The Lord’s Day is indeed special. It comes once a week. And while it’s a regular occurrence and as such easy to regard as common, it deserves all the focus, prestige, and ceremony we’d shower on a formal. More, in fact, for we’re being invited to enter the presence of the King.

Prepare ahead of time. I pack my children’s lunches and lay out their school clothes the night before so mornings aren’t so hassled. Earlier bedtimes ensure we’re not lethargic the next day. I can prepare for Sundays in a similar way.

Tune your heart by spending time in worship, prayer, and the word. Our church has prayer before the service in the sanctuary. The next best alternative to joining others in preparing our hearts in such a way is to play worship on piano or guitar and pray at home and on the drive to church.

Give thanks. “The one who offers thanksgiving as his sacrifice glorifies me; to one who orders his way rightly I will show the salvation of God!” says Psalm 50:23. Giving thanks is one of the quickest and most effective ways to assure proper mindset before God. The psalmist says in fact that thanksgiving is how we enter His gates (Psalm 100:4). I often redirect restless thoughts by thanking God for the tremendous gift of living in a country where I can freely worship Him.

Fast. The Sundays when I fast, I generally find I am much more attuned spiritually to everything: the worship, the sermon, and the prayer. There is often a hunger in my spirit and a sharp receptiveness to the word of God and to His presence.

How about you? Can you relate to anything described here? How do you prepare yourself for entering the Lord’s house to worship?