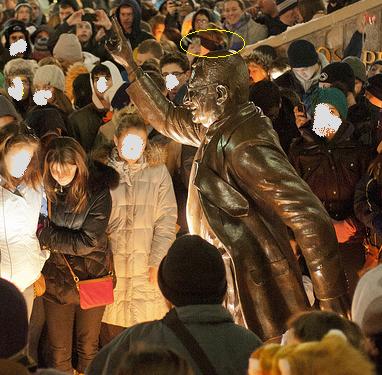 They came across denominational lines to worship him. They put their own reputations on the line to extol his. With passion they sounded his praises, and in anger some even ravaged those who dared to blaspheme his good name.

It wasn’t Christ to whom these Christians paid their homage all over social media and in front of friends and acquaintances. It was Joe Paterno, Penn State’s iconic football coach.

Two years ago I observed all this in the wake of breaking news that sworn testimony confirmed Joe Paterno had witnessed – and done little – to intervene in child sexual abuse by Jerry Sandusky, his former defensive coordinator. This past week when the NCAA reversed a portion of Penn State’s subsequent penalty by restoring 111 of Paterno’s wins, I witnessed the pageantry, the tributes, the photos, the syrupy speeches about Paterno all over again – and many of them by professing Christians.

It is not my wish to debate the merits or the message of the restored wins the NCAA granted the university, nor delve into the particulars of the trial or testimony. But I cannot help but be alarmed by the depravity of worship this man received and continues to attract by some. Especially and even more so, since that includes dozens of Christians on social media – people I’ve not seen demonstrate half as much unbridled emotion or outspoken loyalty for the Lord Jesus Christ – our Savior and the only perfect Man.

“You’re being judgmental.” Perhaps. Or maybe discerning something others don’t like. What is it in our fallen nature that is hell-bent on following a mortal man?  It is why cults form.  Sports figures and other pop icons and even certain ministers and Bible teachers are so revered by some that it’s become idolatry.

The false gods of Hinduism and other world religions are abundantly obvious. But to who or what are some of us Christians in the west giving our highest and heartfelt adoration? What are we consumed with?