Four Blood Moons and The Day of the Lord

Four Blood Moons and The Day of the Lord (Part 2) 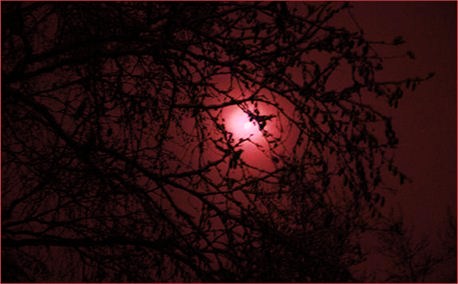 You’ve probably heard of the lunar eclipse that is to take place April 14 through April 15 across North America. This eclipse is also called a “blood moon” because of the appearance of the color of the moon while this occurs. At its peak, weather permitting, the eclipse will mark “the beginning of an eclipse tetrad – four back-to-back total lunar eclipses” according to Space.com.

Many Bible scholars and those who focus on end-time prophecy in the church see a correlation between these celestial events and the ones highlighted in scripture that forewarn of The Day of the Lord. For example, Joel 2:31 says that “The sun will be turned into darkness and the moon into blood before the great and awesome day of the LORD comes” (NASB). Likewise, Revelation 6:12 describes a scene in Heaven that occurs at the end of the age: “I looked when He broke the sixth seal, and there was a great earthquake; and the sun became black as sackcloth made of hair, and the whole moon became like blood” (NASB).

What do the blood moons signify? According to CBN.com, the times that blood moons have appeared before in the past 500 years, there was always a significant event tied to Israel and the Jewish people, including Israel’s rebirth as a nation in 1948 and the Six-Day War in 1967 that recaptured Jerusalem. CBN.com further says, “Blood moons are set to appear in April 2014, on Passover, and then again in September 2014 during the Feast of Tabernacles, or Sukkot. The timing is the same for 2015 — a total of four blood moons, all appearing on Jewish feast days.” It seems likely that God will again use heavenly bodies to signal earthly events as He did throughout scripture, including Joshua’s defeat of the Amorites (Josh 10:12-14) and the birth of Christ (Matt. 2:2).

So what do we do?

Jesus told us His disciples that we’re to watch, to “be on the alert, for you do not know which day your Lord is coming” (Matt. 24:42). This command applies 24 hours a day, seven days a week, blood moons or not. It is evident that many of our church leaders we’ve looked to throughout the decades for guidance are themselves falling away from faith (in terms of refusing to label religious groups that distort the Person of Jesus “cults”, ordaining those openly involved in sexual perversion, and others refusing to adhere to core doctrinal truths).This great apostasy was also foretold by Christ (Matt. 24:10, 1 Tim. 4:1) as one of the signs of the last days.

A friend of mine pointed out that when Jesus taught us how to pray in Matthew 6, He taught us we’re to ask for ourselves “do not lead us into temptation, but deliver us from evil” (v. 13). My friend said that if Jesus told us we should pray this way, just like we depend on Him for our daily bread, then we should do it, expecting that if we don’t, we can indeed be led into temptation, especially false doctrine that leads to destruction. Since Jesus instructed us to pray this way, I pray The Lord’s prayer over myself and my family regularly, as well as others that He brings to mind.

2 Peter Chapter 2 discusses false teachers, the last days, and highlights Noah and Lot and how God protected these men and their families in times of peril and judgment. Jesus in fact said that the last days would be like the days of Noah and the days of Lot (Matt. 24:37, Luke 17:26). Peter in this passage then summarizes these perilous times like this, “the Lord knows how to rescue the godly from temptation and to keep the unrighteous under punishment for the day of judgment” (2 Peter 2:9 – NASB).

If you are considering staying up to get a glimpse of this historic lunar event, it is an excellent occasion to watch and pray at the same time. Midnight to three is reportedly the ideal time to see the blood moon, and midnight to three is precisely the Biblical “third watch” of the night (see Exodus 14:24). How exciting to be part of these times!