Spiritual Warfare – the helmet of salvation 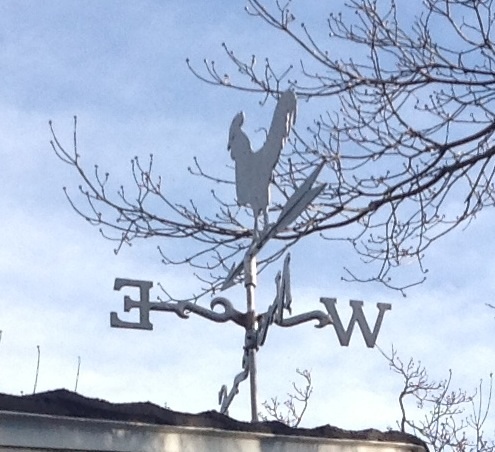 The following are my teaching notes from Dickinson College, where I spoke earlier this month on the topic of peer pressure:

It is wonderful to be back here at Dickinson. You know, I still dream sometimes that I’m a Dickinson student. And it’s always a variation of the same dream. It’s senior year, and we have only a day or two before graduation – the campus is clearing out – and I have no idea what I’m going to do with the rest of my life.

It is this tension between our beliefs and the culture in which we live that constitutes peer pressure. We know in our minds and in our spirits that there is a way that is right, that brings about life. And the only way and the only life is found in Jesus Christ. And all around us is a way of thinking that brings about destruction, because it wants to have all the good things of God – prosperity, satisfaction, meaning, peace, knowledge, deep relationships, fulfillment, purpose – yet ultimately it wants to bypass God Himself.

And like George MacDonald said, “All that is not God is death.”

Would you believe me if I told you that peer pressure – this tension between what the culture mandates and what scripture says – doesn’t go away once you graduate? Or once you’re out of your twenties? Or once you’re married with kids? It’s not something that suddenly disappears, or one day you outgrow.

When I asked The Lord for a scripture, He kept bringing Romans 12:2 to mind.  “Do not be conformed to the pattern of this world, but be transformed by the renewing of your mind.” I didn’t want to talk about this verse, because all throughout my growing up years, I felt this was the verse used to beat us over the head about peer pressure. But God said to me, “Look at that verse again.”

“Do not conform to the pattern of this world, but be transformed by the renewing of your mind.” You see, the battleground is in the mind. And the pattern of the world governs mindsets. It’s not just how a few people on campus view things – rather, it is a mindset true for almost the entire campus. There is very little diversity on college campuses.

For example, how education is viewed – is it a tool given by God? Or IS it a god? Sexuality – is it primarily a physical union that anyone should be able to do with everyone or everything at any time? Or, is it primarily a spiritual union with spiritual implications, designated by God? The planet itself – Psalm 115:16 says “The highest heavens belong to God, but the earth He has given to the sons of men.” God placed man on earth as His viceroy, so to speak, to cultivate the earth, to make it flourish; but not to worship it. Even pollution – the deterioration of the earth – is mentioned repeatedly throughout scripture. The Bible states over and over the cause for the earth being damaged – it’s sin! Try telling that to the Sierra Club!

But the mindsets can be much more subtle than that. And they can be found in churches just like they can be in institutions of higher learning. Such as, “Well, I know God CAN do anything in this impossible situation I’m facing, but I don’t really think He will – or wants to.” Or, “I know God can have His way in this campus and bring about a spiritual awakening that’s unprecedented in the history of the college, but I really think before that happens, the world’s going to come to an end, the tribulation will start, and I’ll probably be raptured away. In the meantime, it’s all going to hell in a handbag, but I’m going to hang on and just be sure it doesn’t happen to me.”

Every time we choose to believe a lie, no matter how insignificant it might seem, we come into agreement with the devil. It can be as subtle as sitting in class before the professor walks in and laughing at a story that is being told by a classmate that doesn’t glorify Jesus Christ. What’s the lie there? If I don’t join in, I’m going to be discounted as a goody-two-shoes prudish holier-than-thou judgmental Christian – and Christ isn’t worth the backlash and exclusion I might feel by separating myself from what’s being said. (Now, we don’t consciously think all that – but in a matter of seconds usually, that is the subconscious lie we’ve taken hold of – and we’ve conformed to the pattern of the world).

You know, for most of my life I grew up understanding the Bible – understanding Christianity – as the gospel of Salvation. That is, believe in Christ, be holy in your living, and someday, when you die, you’ll be free of the flames of Hell and spend eternity with Jesus. That is true. But it’s only a piece of what Jesus taught. The gospel that Jesus preached was the gospel of the kingdom. The first words Jesus began preaching after He was baptized and anointed with the Holy Spirit were, “Repent, for the kingdom of heaven is at hand.” Repent in its original Greek means what??? (A: to change one’s mind.) “Change your mind, because the kingdom of Heaven is at hand. You thought it was for someone else for some other day for some other situation, but I’m telling you,” Jesus says, “It’s at hand. It’s within reach. It’s for today – for you – for this very real situation you’re up against.” Repentance isn’t just being sorry for your sin. It is very much that. But it’s beyond that. To repent is to come into agreement with the word of God. It is to see the entire world the way that God sees it. 1 Cor. 2:16 says “You have the mind of Christ.”

Jesus said in John 10:10 “I have come that they may have life and have it more abundantly.” Many times over the last several years, I looked back on my life before I gave Lordship of it to Christ, and I was always struck with the contrast, of how depressed and in despair and how dissatisfied I was until He brought His life into every area. But only recently have I begun to really note how boring – how frightfully dull – my life was before He transferred me from the domain of darkness into His glorious kingdom of light.

When Jesus taught us to pray The Lord’s Prayer in Matthew 6, He said to pray in this way: “Our Father, Who art in heaven, hallowed be Thy name (let it be reverenced at Dickinson College, where in this culture it is mocked and belittled!), Thy Kingdom come Thy will be done on earth at as it is in heaven.” That is a revolutionary prayer! That is a prayer that in essence means, “Let Your kingdom be established here on Dickinson College campus just like it is in Heaven. Your will is clearly not being done in 95% of the activities and speech and teaching here, so Thy will be done instead.” That is a revolutionary prayer! The Lord’s Prayer is a prayer that overthrows the kingdom of Satan and establishes God’s kingdom in its place. A prayer that refuses to bow to mindsets and instead establishes God’s truth.

God doesn’t want you to muddle through these next few months or years at Dickinson and HOPEFULLY keep your faith intact. He wants you to turn this campus on its head! He wants to establish His kingdom here at Dickinson College. He wants to bring healing and deliverance to people who are in physical and emotional and spiritual bondage.

It’s not going to happen automatically:
God works through us – He partners with us. That is His pattern all throughout scripture. God could have led His people out of Egypt with a word of His mouth or a breath from His nostrils. Instead, He called from a burning bush to a shepherd by the name of Moses who was scared and couldn’t speak well. He used Deborah and Daniel and Gideon and Joshua and Esther and David and Mary and Elizabeth and Peter and Stephen and Paul and Lydia and countless others. His will is not done automatically – it is brought to earth by His people praying and obeying Him.

Prayer – God’s will is executed through prayer – in your private prayer closet and also corporately. We must be in continual prayer (1 Thess. 5:17), especially in these desperate times. Corporate prayer builds faith and means more “spiritual muscle!” (Matt. 8:20, Matt. 18:19, Deut. 32:30).

Bible – every day meditate on scripture. If you have time to eat you have time to read the word. Don’t conform to the pattern of thinking that you don’t have time. Give Him fifteen minutes and He will somehow multiply it back into your day. Give Him thirty minutes and He’ll give you even more. I don’t know how He does it, but I’ve found it to be true again and again.

Obedience – as you tune in to God, He will give you specific strategies and words to speak at specific times and to specific people. Obedience releases the Holy Spirit into situations.

Finally, God may be calling some of you here into a prayer ministry for healing. I have found from personal experience that when the church is ministering in healing and deliverance, there is a doorway open wide to evangelism. When you are bringing the Holy Spirit’s supernatural power to situations that sometimes even doctors can’t help, you will find your audience is much more likely to be interested in hearing about the God that heals.